What is Deep Vein Thrombosis?

Deep vein thrombosis (DVT) is a condition in which blood clots form in a vein deep within the body. The word thrombosis means forming a blood clot. The clot itself is called a thrombus.

A blood clot is a jelly-like mass of congealed blood. Clotting is the normal way the body stops bleeding and begins healing following injury. Once the clot has done its job, the body absorbs it. Sometimes, however, blood clotting can prove harmful. 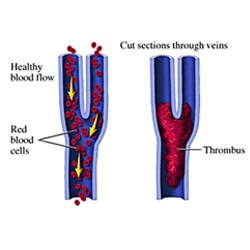 DVT occurs when a blood clot forms in a deep vein and remains there.DVT usually involves the formation of a large clot in the deep veins in the lower legs and thighs. In rare instances, DVT can occur in the area around the armpit and collar bone (axillary-subclavian vein thrombosis), in the upper arm, abdomen, or pelvic region.It is a dangerous condition because the clot may become dislodged from the vein and travel inside the vein all the way to the lung, where it may get trapped and block a vessel in the lung. This is called pulmonary embolism, which can be deadly. 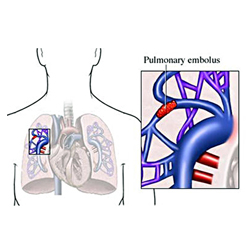 What causes a DVT?

Three factors increase the chance of having a DVT-

Injury to a deep vein from trauma or surgery causes release of substances that activate the clotting system. Blood that is not moving (stagnant)is much more likely to clot. Conditions that can cause poor circulation in deep veins include-

The body produces a number of clotting factors (many are made in the liver), maintaining a fine balance between factors that cause blood to clot and those that either prevent or dissolve blood clots. Clotting is needed to prevent excessive bleeding when blood vessels are injured. When clotting is no longer needed other clotting factors help dissolve clots. When this balance is disturbed either excessive bleeding or clotting of blood that serves no useful purpose may occur. Increased blood clotting (hypercoagulability) may be caused by Hormones (birth control pills, pregnancy),Cigarette smoking, certain cancers, Inherited deficiencies of anticlotting factors and certain autoimmune disorders .

Who gets a DVT?

What are the symptoms of a DVT?

Symptoms of a DVT are variable, occurring in less than half of persons with DVT. Symptoms, depending on the size and location of a DVT, can include-

Other medical conditions can cause pain and/ or welling in the legs. Persons with pain and/ or swelling of the legs should see their doctor or go to an emergency department for evaluation, especially if they have DVT risk factors. 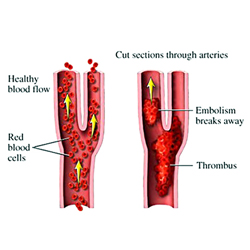 What are the symptoms of Pulmonary embolism?

Symptoms of a pulmonary embolus may include-

Another complication of DVT, particularly recurrent DVTs, is postphlebitic syndrome. Chronic stretching and injury to deep veins may cause blood to pool and stagnate in the lower legs. This can cause chronic swelling and pain in the affected leg. Leg sores may also develop. Although not life threatening this condition can be unpleasant

How does a Doctor diagnose a DVT?

Doppler ultrasound is most commonly used. This tests, using sound waves to create a picture of the veins, is very accurate and noninvasive. It is able to reliably detect DVTs in either below or above the knee.This may be supplemented by tests of your blood like D-Dimer assay.

How is a DVT treated?

Treatment of a DVT may depend on both its location and underlying cause. Anticoagulants (blood thinners), which keep the clot from getting larger, are the mainstay of DVT treatment. In certain circumstances clot dissolving (thrombolytic) medications may be used by inserting a tube into your leg vein. During this procedure(done in the cath Lab or the operation theatre), your might require a special device called a FILTER to be inserted into your main abdominal vein(IVC) to prevent clots from travelling into the lung.This filter is inserted thru your groin via a small tube and can subsequently removed by the same route after a few weeks/months when the risks are overcome.

DVT occurring in only the calf (below the knee) rarely embolize. Treatment consists of bedrest at home and anti-inflammatory medications. Anticoagulants are not needed unless the DVT continues to spread (propagate) into the veins of the knee or thigh. Clot propagation occurs in 10 percent to 30 percent of DVTs below the calf. For this reason your doctor will follow you closely and want to know if pain or swelling occur at or above the knee. Your doctor may hospitalize you if there are risk factors for propagation such as previous DVTs, being bedridden, or having a hypercoagulable disorder.DVT occurring in deep knee or thigh veins, known as proximal DVT, require hospitalization and anticoagulation because of increased risk of pulmonary embolus.

Side effects of anticoagulant and thrombolytic medications

Anticoagulants can cause both minor and serious side effect- most related to bleeding. Persons taking anticoagulants must notify their doctor if they develop bleeding from any sites in their body like nose, urine,gums, stools etc.thrombolysis treatment in addition to above suide effects can cause strokes, especially in the elderly.

If you are taking anticoagulants it is extremely important you discuss side effects and other medications you may be taking with your doctor in more detail!

How long are anticoagulants taken after a DVT?

This varies from few weeks to 6 months in most cases but may be required life long if your risk persists.

How can DVT be prevented?

Because of the potential serious consequences of DVT, prevention is essential. Thus, doctors urge patients who have undergone surgery to get out of bed and walk as soon as possible. Also, post-surgical patients are asked to wear anti-embolism stockings (lightweight, stretchy hose that cover the leg from the toes to the top of the thigh) while lying in bed.Other measures include:anticoagulants & pneumatic compression to calves my special pumps installed next to your bed

Can DVT lead to amputation?

Most cases of amputation are associated with blood clots involve clots of the arteries. Such clots prevent the flow of blood to tissues beyond the blockage, causing tissue death (necrosis). Rare instances of amputation associated with deep vein thrombosis occur in individuals with "blue leg" (phlegmasia cerulea dolens), in which there is a massive venous thrombosis of the upper leg as well as an advanced malignancy (cancer) elsewhere in the body.

Send us a message